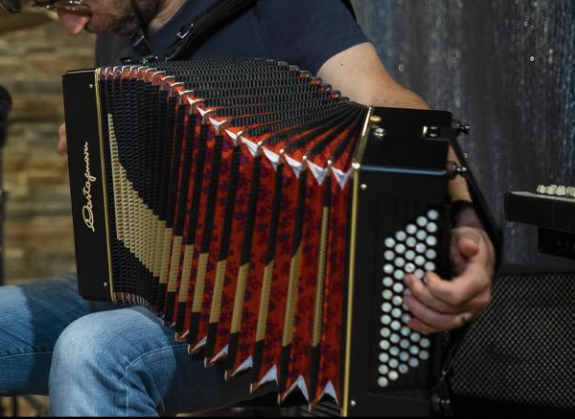 Roberto Lucanero is a musician and ethnomusicologist. He is active as an accordionist, accordionist, medieval portative organ player, composer, teacher, essayist. Born in 1971 into a family where the accordion tradition is very strong, Roberto Lucanero has linked his professional and human path to this instrument since childhood. He trained musically in the Mugnoz school of Loreto (An) where he studied accordion, piano, harmony and musical analysis. Since adolescence he began his activity as a musician ranging from contemporary music, jazz, songwriting and folk: he made his professional debut with the Quartetto Adamo Volpi of Loreto, he directed the Fisorchestra Città di Osimo for a few years, collaborated with Peppino Principe, Rossana Casale, Roberto Paci Dalò, Luca Miti, Giovanni Seneca, La Macina, Raffaele Mazzei. A pupil of Roberto Leydi and Giampiero Cane, he graduated in ethnomusicology at the DAMS in Bologna with a thesis entitled The organ in central Marche. He publishes various articles and essays, many of which are dedicated to the accordion and accordion. From 2000 to 2012 he worked in the Commercial Office and the Research and Development department of the Excelsior Accordions accordion factory in Castelfidardo (An), now a department of Pigini srl.

Roberto Lucanero currently dedicates himself to teaching, concerts and essays. As a teacher, he regularly teaches diatonic accordion at the Paolo Soprani Civic School of Music in Castelfidardo. He regularly holds traditional dance workshops and lectures on traditional music and dance both in Italy and abroad. As a musician he is active in solo, with the trio that bears his name, in duo with Marco Meo (singer, tambourine player), in duo with Paolo Filippo Bragaglia (keyboardist, composer), with the Canzoniere Piceno Popularia, with the Adriatica Orchestra by Giovanni Seneca. He is also part of the international Pentakkordeon group, led by Colombian organ player Antonio Rivas and including Joseba Tapia (Basque Country), Peter Ralchev (Bulgaria), Serge Desaunay (France).

We inform you that the Green Pass will be required to access the events. During concerts be followed the following rules
• Always wear a mask, even during concerts.
• Wash and sanitize your hands often.
• If you contract COVID-19 within two weeks of the event, contact us.